The Flattening of Design

Flat design is become the stylistic choice for technology companies, partly driven by the constraints of smartphones, and also with a hope to escape the look of digital design. Is it also beginning to permeate new brands and packaging? 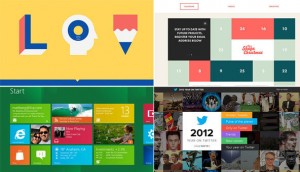 It might sound audacious to think that Microsoft, the arbiter of uncool, was at the forefront of design a few years ago. But it was.

It turns out the company's decision to focus on "flat design," a type of visual scheme where everything has a smooth and even look, was a few years ahead of the rest of the technology and user interface industry.

While Microsoft was flattening its interfaces as if it were a child pushing down on a bulge of putty, its competitors - including Apple and Facebook -- were focused on skeuomorphism, a type of look in which, say, a note-taking feature on a Web site or in an app would look like a spiral-bound notebook, a reference to the real world look of a notebook.

Now everyone seems to be following in those flat footsteps.