Can you tell "Monterey Jill" Reduced Fat Cheese Is For Women?

Lucerne released a counterpart to its Monterey Jack product called "Monterey Jill." Some critics found it mildly sexist because the product is geared towards women and marketed as "Monterey Jack's lighter companion." 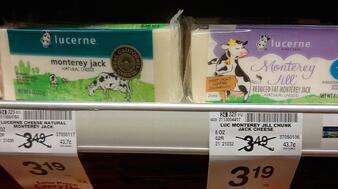 Hey, ladies! Have you been feeling like you can't buy Monterey Jack cheese because it's got a masculine name and is just soo fatty? Lucerne has the solution, something it calls "Monterey Jack's lighter companion": It's a lady cow named Monterey Jill -- complete with swirly purple writing and curvy flourishes -- wearing a flower on her head, fancy pearls and a sassy smirk. Because only women want to cut the fat, clearly. Sarcasm hats on, everyone.

Meanwhile, Monterey Jack features gender neutral colors and a couple of regular cows -- which are still female, because that's what the word "cow" means. So apparently Monterey Jack just doesn't feel the need to wear jewelry and go to the hair salon.

This isn't a new product -- though we first saw it on the Seanan's Tumblr, the blog Sociological Images had a post about it over a year ago and brought up all the issues anyone with a pair of eyes and a non-sexist attitude would have.

Do only women want reduced fat cheese? No. Are all women into dieting and reduced fat products? Definitely no (especially when it comes to cheese because seriously, you are just ruining it that way and it makes my heart cry little cheesy tears).

At the end of the day, you don't have to buy the stuff if the preening Jill makes you mad, but we still reached out to Lucerne to see if the company had anything to say to critics of the packaging who might find it sexist.

Read more from the source: Consumerist