Who is the "Free-From" Shopper? 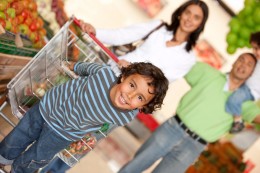 Are your shoppers buzzing about “free-from” foods?

If so, it’s no surprise—consumer demand is growing for products that are free from ingredients such as gluten, allergens, GMOs, artificial flavors and preservatives, added sugars and unhealthy fats. In fact, almost 13 percent of global food and beverage introductions in 2013 included a free-from claim, up 3 percent over the previous five years, according to What’s In Store 2015 by the International Dairy-Deli-Bakery Association.

Who is the “free-from” shopper? The 2014 Food & Health Survey from the International Food Information Council (IFIC) Foundation offers some possible insight.

Beyond that, the survey carved out a segment of respondents (23 percent) that seems to embody the “free-from” consumer. These respondents were identified as having had a recent emotional conversation about food choices. They tend to be younger on average (about 43), female and have kids at home.

The analysis says that these respondents are “passionate about food,” and give a great deal of thought about the healthfulness, ingredients, sustainability and safety of foods. Two-thirds think a lot about ingredients and more than half consider 18 different food components when they shop. Their purchase decisions are highly influenced by a product’s healthfulness, with 86 percent saying this factor has an important impact. They’re especially likely to seek out protein, calcium and fiber, and to avoid or limit added sugars/sugars in general, high fructose corn syrup, saturated fats and preservatives. They’re more likely to use health claims on labels to make buying decisions, and to regularly buy foods labeled as natural, organic, antibiotic-free, hormone-free and eco-friendly, according to the IFIC analysis.

Read more from the source: ProgressiveGrocer